Many experts say there is cause for optimism in the real estate market once the COVID-19 pandemic subsides. Some of the factors experts point to are:

The impacts to everyday life from COVID-19 are stark. Governments at the federal, state and municipal level have enacted a variety of anti-epidemic measures ranging from density controls to stay-at-home-orders. These measures have greatly affected the US economy.

America ended the 2019 calendar year with an annualized GDP growth of 2.1% and near record-low unemployment rate of 3.5%. CBRE Group—an American commercial real estate services and investment firm—released its forecast on March 25. Their research predicted a massive drop followed by a significant rebound in GDP growth. U.S. GDP is estimated to fall by -20.5% in Q2 2020, followed by an 8.6% increase in Q3 and 15.9% in Q4. 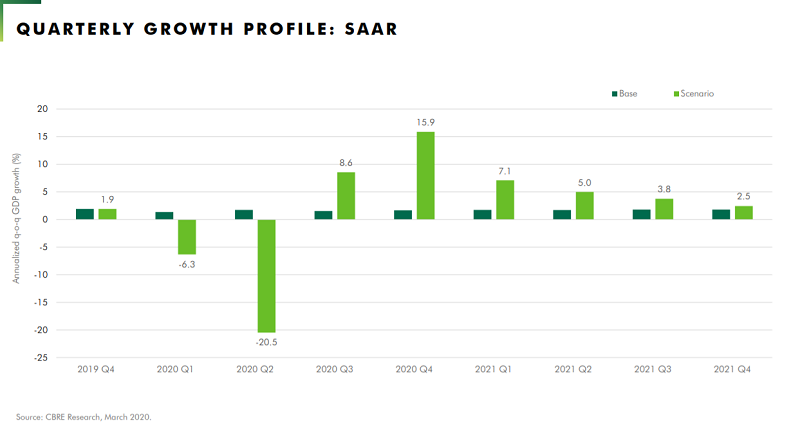 Financial giant Goldman Sachs has projected a similar trend for the American economy. While the first two quarters of 2020 will see the economy shrink by 6 and 24% respectively, it predicts 12% GDP growth in Q3 followed by 10% in Q4. Both Goldman Sachs and the CBRE forecasts point to sizable contractions in the near future, followed by significant rebounds by the end of the year. In other words, there is likely no need to fear long term, long lasting economic damage. 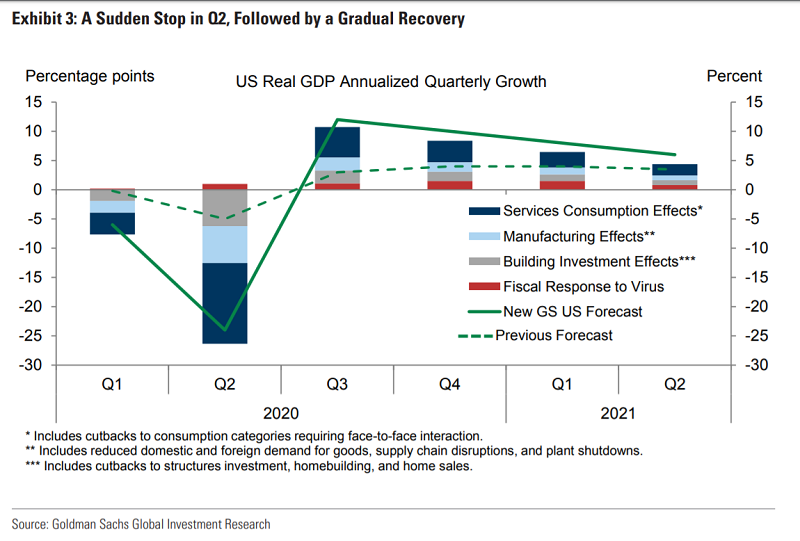 The real estate market has been negatively impacted to the same extent as other industries. Airlines, hotels, leisure and hospitality sectors all find themselves suffering the most from stay at home and physical distancing measures. But while travel restrictions, bans on large public gatherings and closures of restaurants and bars have become common across the US, the construction industry has been permitted to continue operating at full or partial capacity in 34 states.

In the absence of definitive guidance from the federal government as to whether or not construction is being deemed an essential service, it’s important to understand state-by-state variances, in some cases, county-by-county. The map below identifies to what extent each state currently allows construction projects. As of late April, 29 states were allowing all construction projects to continue, 15 allowed some, six states have yet to decide, and Pennsylvania has halted projects altogether.

Despite sweeping stay-at-home orders by states like California and New York, construction workers are still working, so long as they observe extra safety precautions. The wide adoption of construction as an essential service should reduce the impact of coronavirus on the construction and real estate industries compared to others.

Calculating the overall impact of COVID-19 on the real estate market is rendered difficult on account of state-by-state differences. For example, the California real estate market is not predicted to crash. That does not mean that all markets are in the clear however. US housing markets vulnerable to the effects of the global pandemic deemed “overvalued”, according to Fitch Ratings, are at a higher risk of seeing a downturn.

Thankfully, for Californians, Fitch Ratings assessed California home prices as “sustainable”. Other fortunate states like Washington have seen minimal impact to the real estate and construction markets. Agents have turned to virtual open houses and virtual walkthroughs in order to show and sell homes. This has helped the market stay strong, according to Northwest MLS.

On the opposite side of the country, the state of Florida has seen its economy hit hard by large-scale shutdowns. With the NBA and NHL suspending their season, MLB spring training cancelled, Disney World temporarily closing its doors and cruise lines remaining docked, Florida’s $40 billion tourist industry has taken a big hit. However strong demand persists in South Florida’s single family home market (excluding luxury homes).

The federal government’s more than $2 trillion historic stimulus program is designed to stabilize the American economy amid the biggest economic shock since the Great Depression of 1929 and the Great Recession of 2008. While the disruption is significant, it’s important to note that the economy was on fundamentally different footing heading into the former two economic crises. The real estate market across the country is in better shape now than it was in 2008. So when the eventual return to normalcy takes place, we can expect a rebound in the real estate market much like the rebound predicted in the overall economy.