How much would you pay in order to live on the 50th floor of a high-rise? We estimate that you have to pay almost twice the price of an equivalent unit on the 10th floor or 2.7 times the price on the first floor.

Would you pay twice, three-times or quadruple the price to live high in the sky? What if you had a view versus no view? Would you pay more for a home with a view despite it being smaller in size?

In this article, we talk about the rise in price for every floor-level up in the City of Vancouver and according to 2019 MLS real estate data, one apartment located on Georgia Street and neighboring the Trump Tower and the Shangri-La Tower (two of Vancouver’s tallest and most notable buildings), costs $5, 840 per square foot to live on the 26th floor of the Coal Harbour, Vancouver.

Whether you call it a ‘storey’ (British), ‘story’ (American) or ‘floor’, this is referring to the level-up at which an apartment is located. In real estate, generally, the higher up, the more expensive, as the payoff usually comes with a view.

But there have never been exact statistics on how much the value increases per level up. It has always been a mystery to realtors, buyers and sellers in Vancouver as to how much they should pay for every floor they go up. Some say its $4,000 per floor while others say it is $500 per floor. But what is it really?

Data scientists at Roomvu have now done the exact calculation for the average price for each floor level per neighborhood and by what percent it changes as you go up. This means, that finally, the secret is out!

The average cost per square foot, per floor level for the City of Vancouver 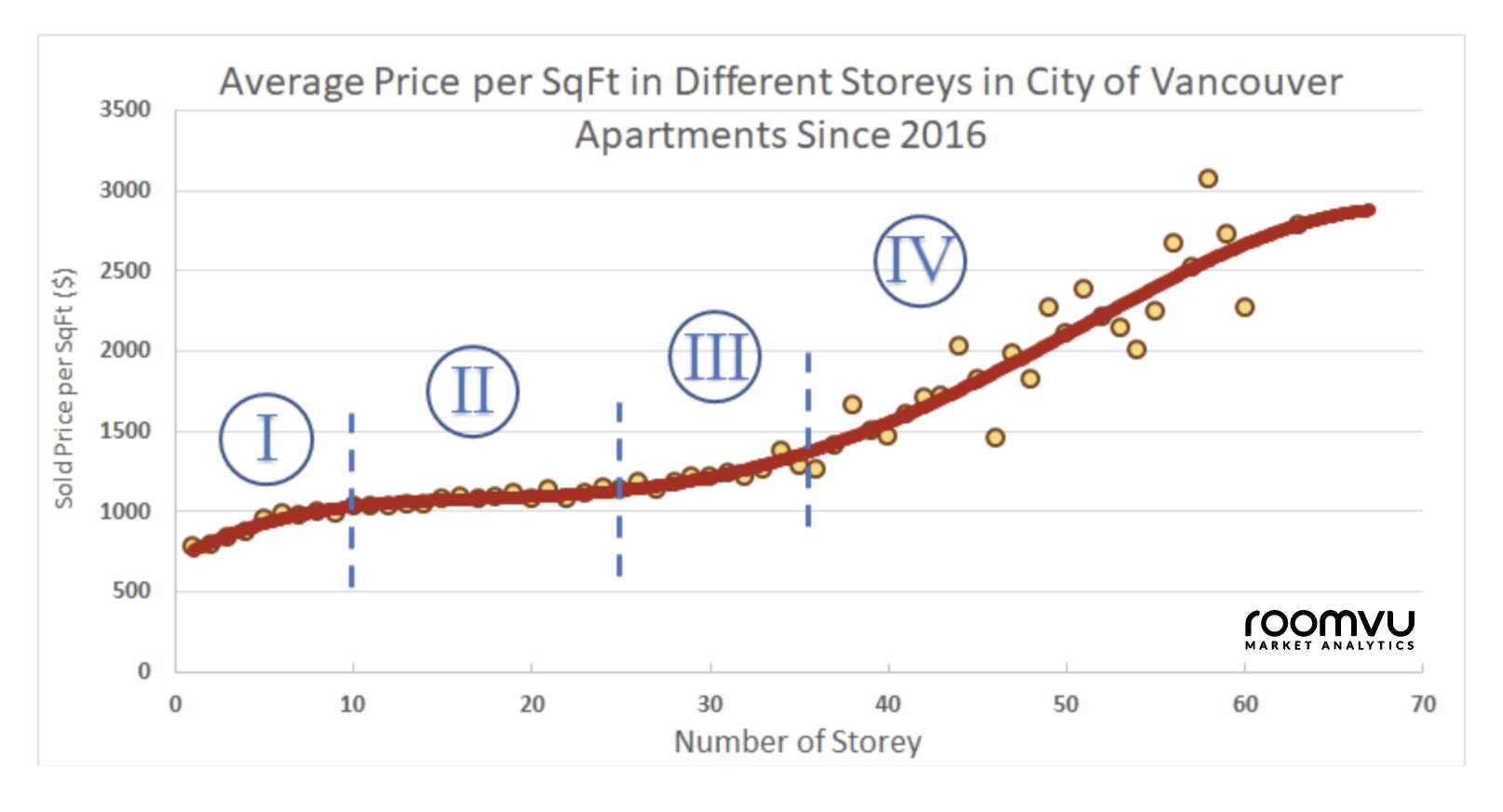 Figure 1: The average cost per SqFt in Different Storeys in the City of Vancouver 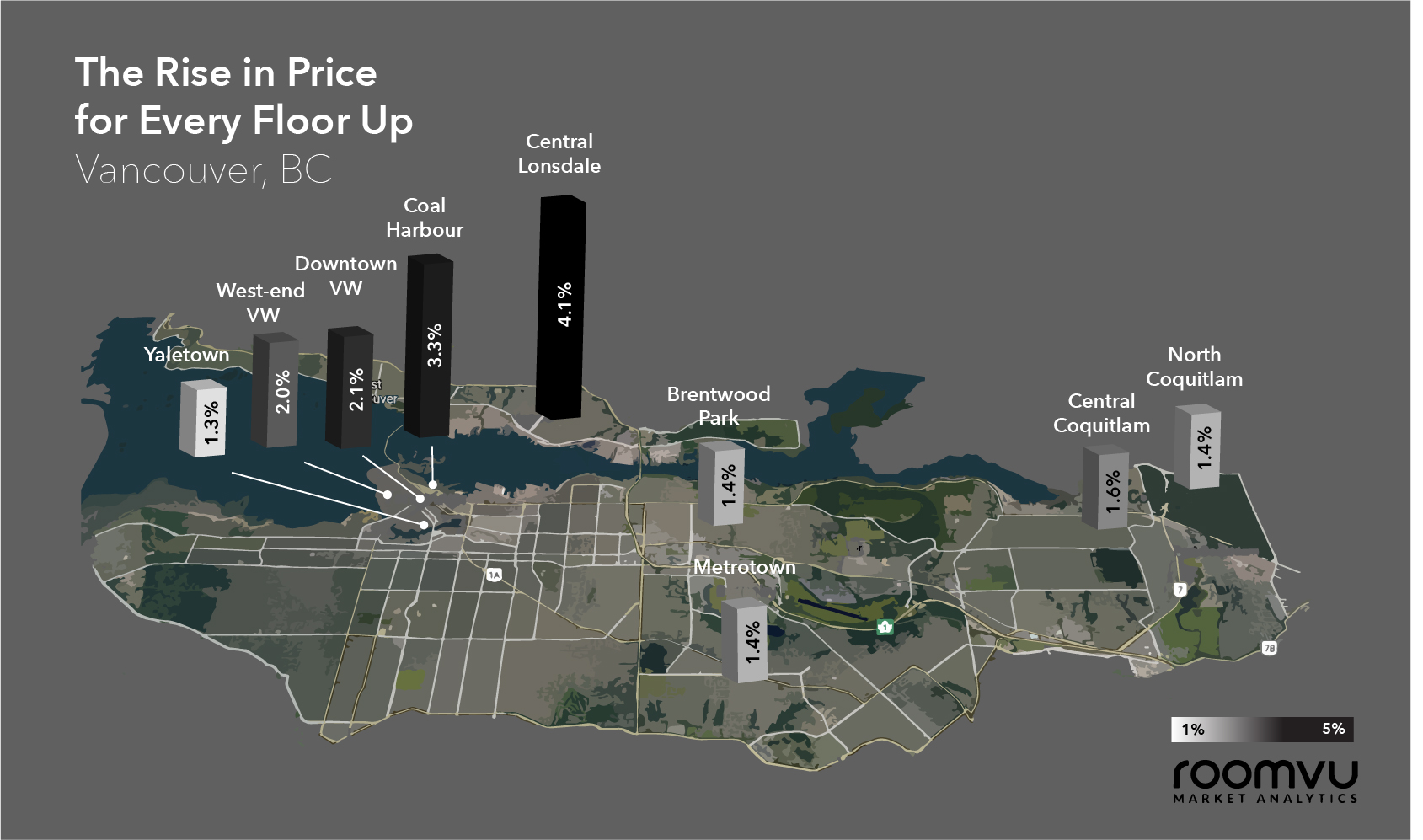 Figure 2: The Rise in Price for Every Floor Up: Vancouver, BC 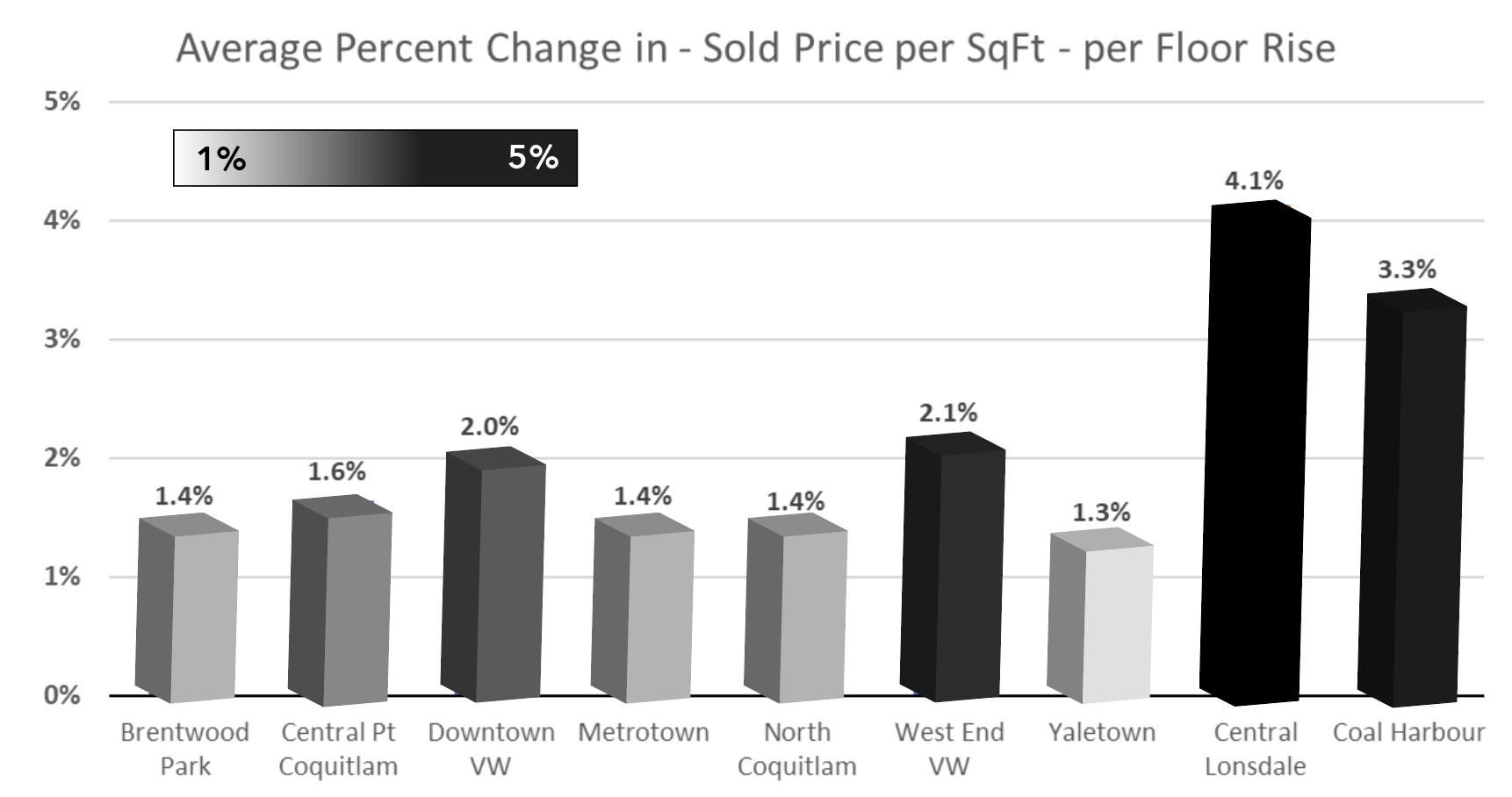 Figure 3: The Average Change in – Sold Price per SqFt per Floor Rise

How the price per floor-level and change in percent was calculated:

-By calculating the average price per square foot, each apartment separating each level from the ground floor to the 65th level.

What the data shows:

In living in Coal Harbour, the starting price per square foot is already high for the first 1-25 floors starting at $1,000-1,300/SqFt. This is mainly because Coal Harbour is waterfront and located in a very lavish area. But, unlike other areas discussed on this map, Coal Harbour jumps significantly in price from the 30th floor onward increasing at approximately 3.3% each floor level up. 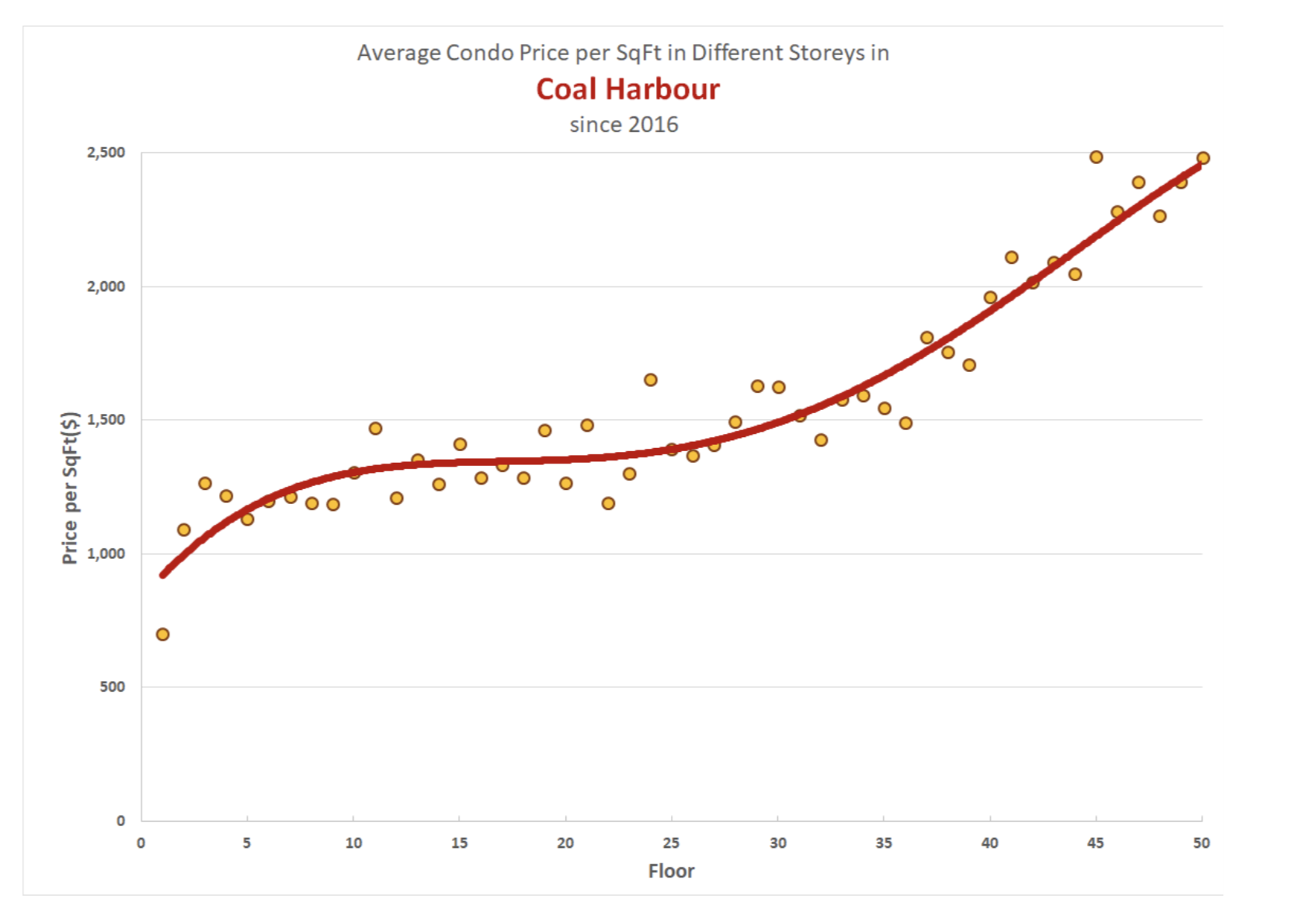 What does a top floor property in Coal Harbour look like?

The entire 26th floor at the most prestigious Three Harbour Green – Waterfront! Two-suites combined to a spectacular & private residence of 6,670 SqFt. This is the ONLY whole-floor suite that’s all on one level in this iconic tower! Experience a live painting of one of the world’s most majestic waterfront views of the ocean, mountains, Stanley Park, the Lions Gate Bridge, Coal Harbour Marina & Park & mesmerizing city vistas in 360 degrees. 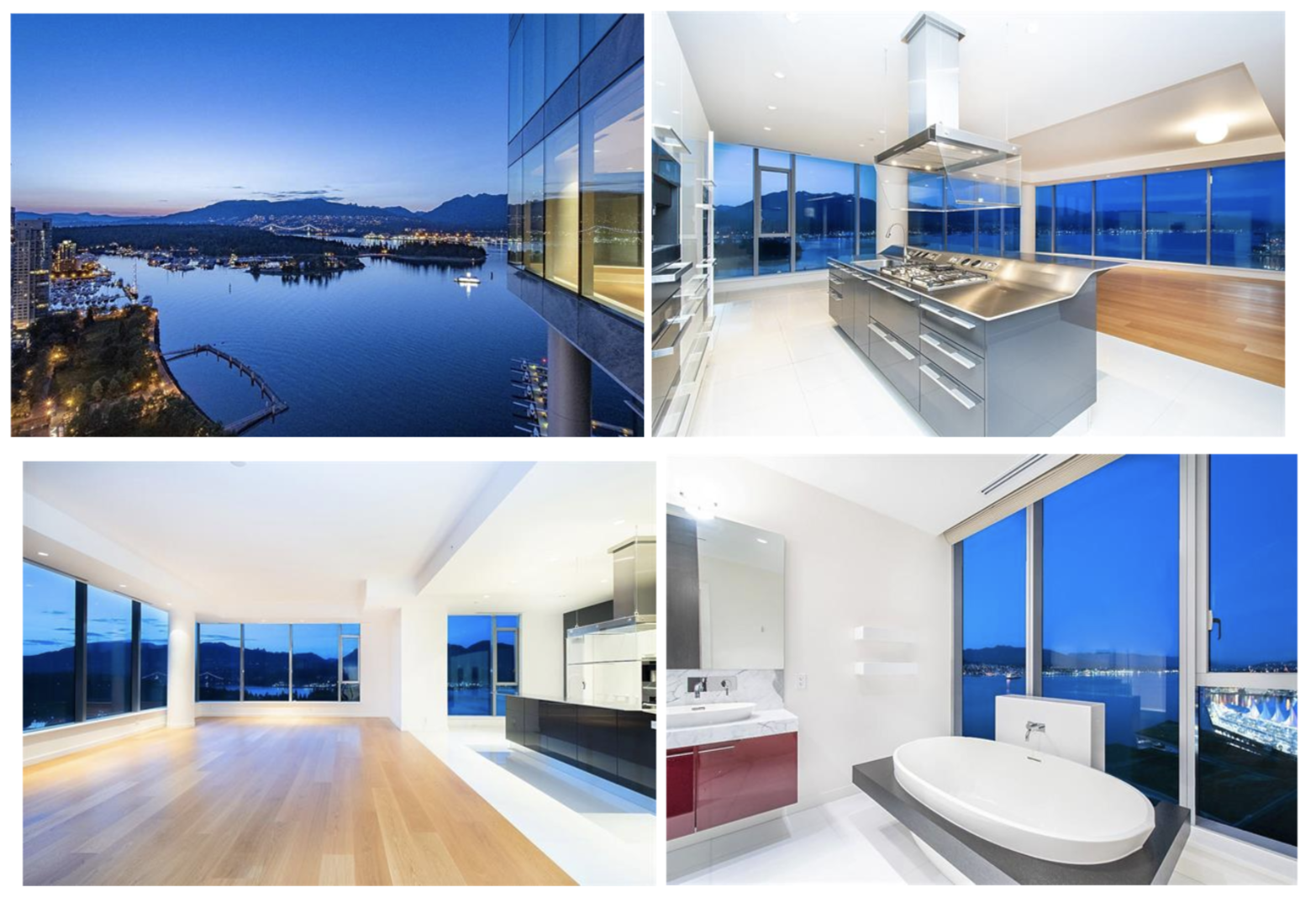 Downtown Vancouver, alike Coal Harbour, also has a higher starting price per square for the first 1-25 floors. But the price is slightly lower than Coal Harbour with lower floor prices starting at $700-1,100/SqFt. However, the price is still high due to the high cost of living in Downtown Vancouver. What’s interesting, though, is that after the 30th floor, the price significantly increases averaging at a 2.1% rise in price per square foot per floor-level up. 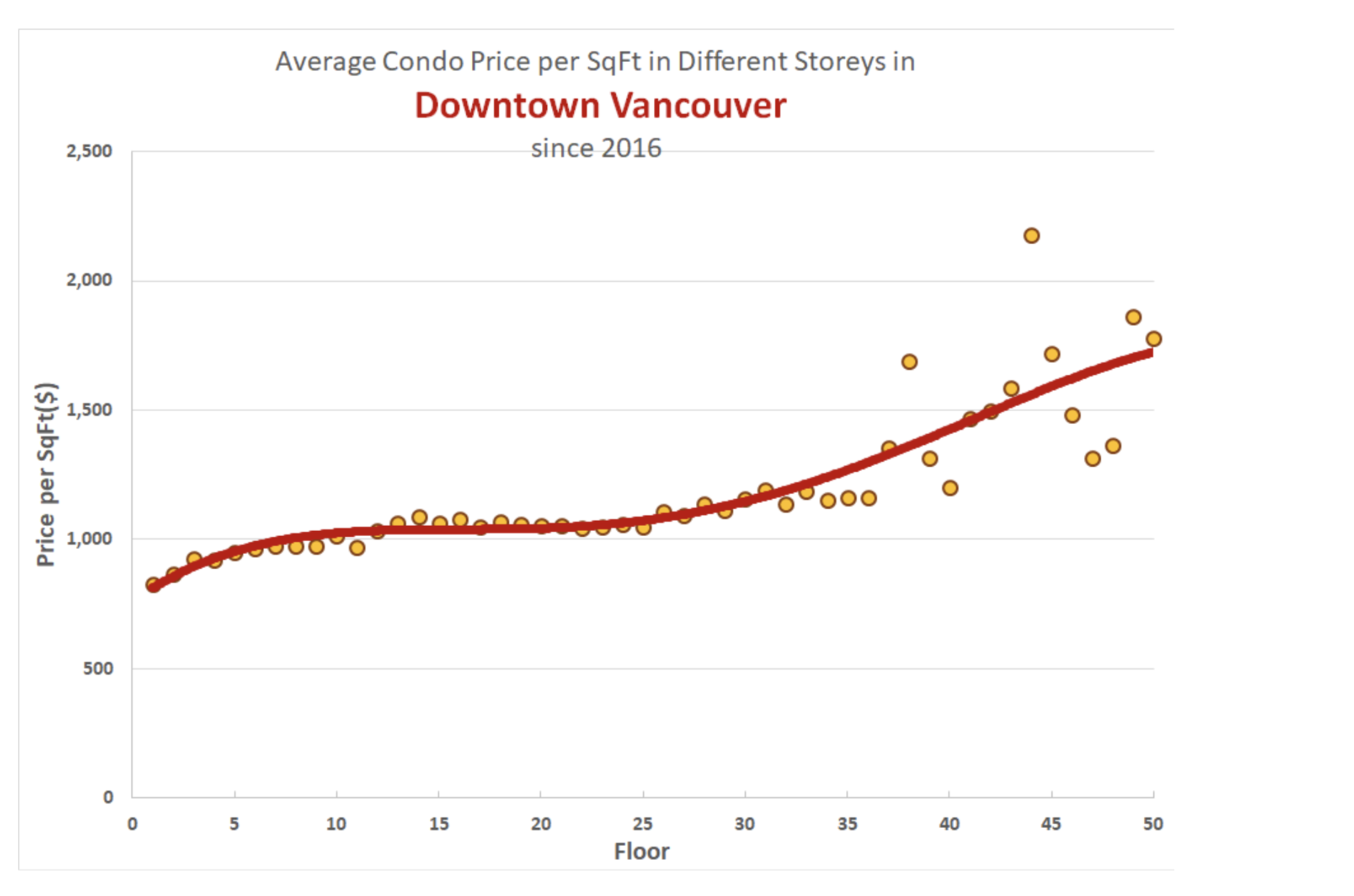 What does a top floor property in Downtown Vancouver look like? 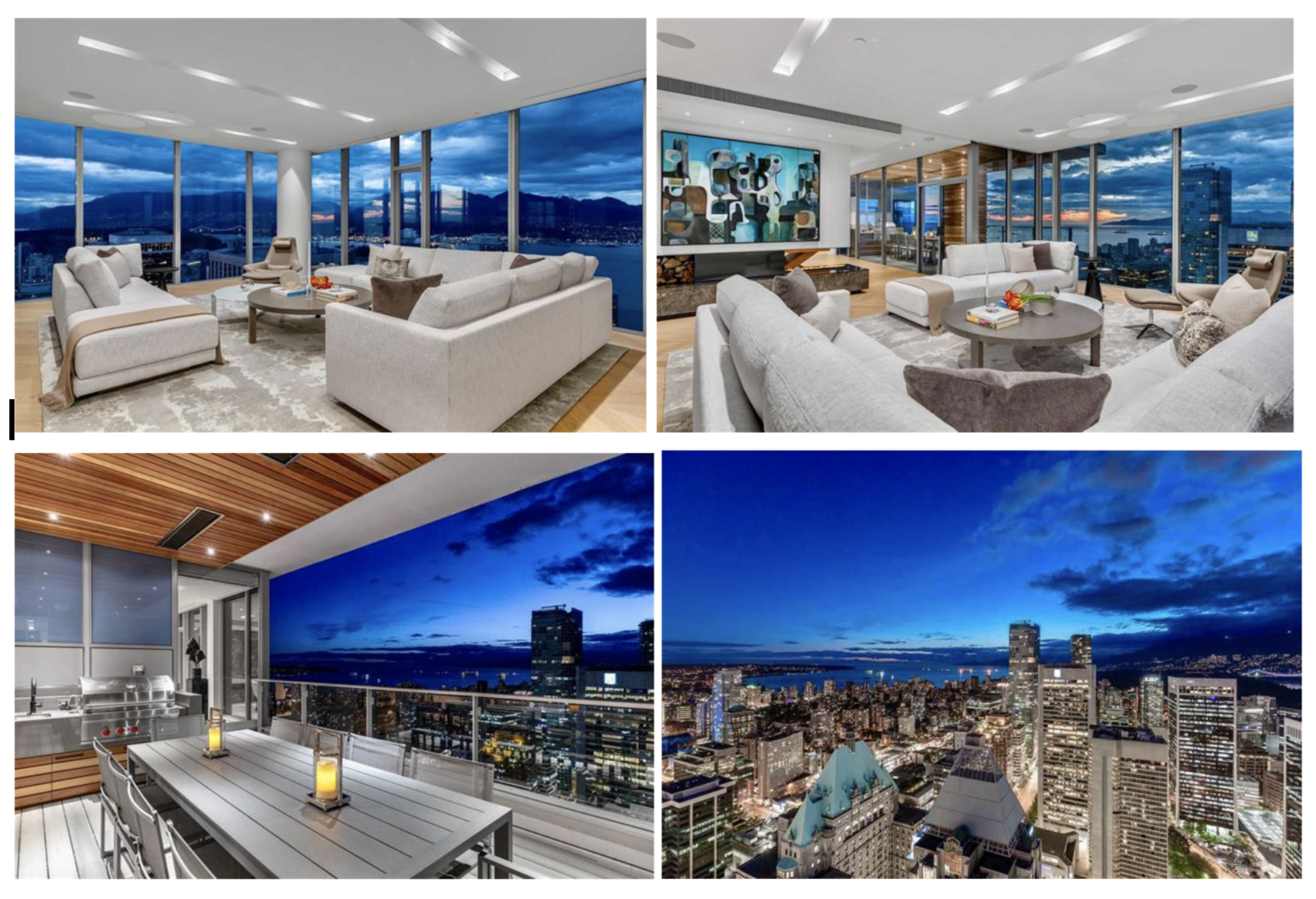 Alike Coal Harbour and Downtown Vancouver, Yaletown is Young and trendy which usually equates to a higher price tag. This is why Yaletown’s prices generally start at around $1,000-$1,200 per square foot for the first 25 floors. However, unlike Coal Harbour and Downtown which show a significant rise in price after the 30th floor, Yaletown does not show a significant price increase until the 40th floor. Here, prices generally increase at 1.3% per square foot, per floor-level up. 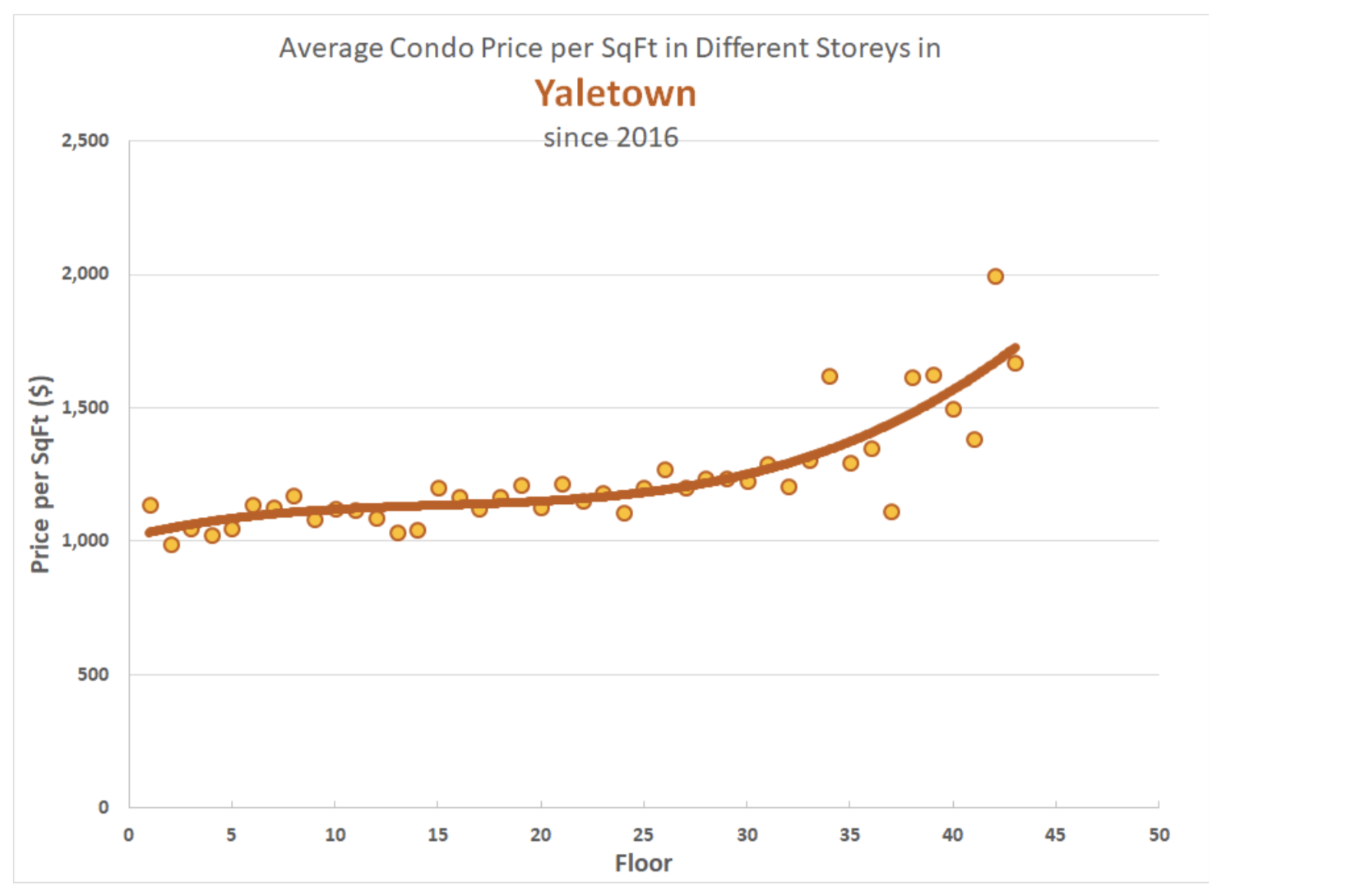 What does a top floor property in Yaletown look like? 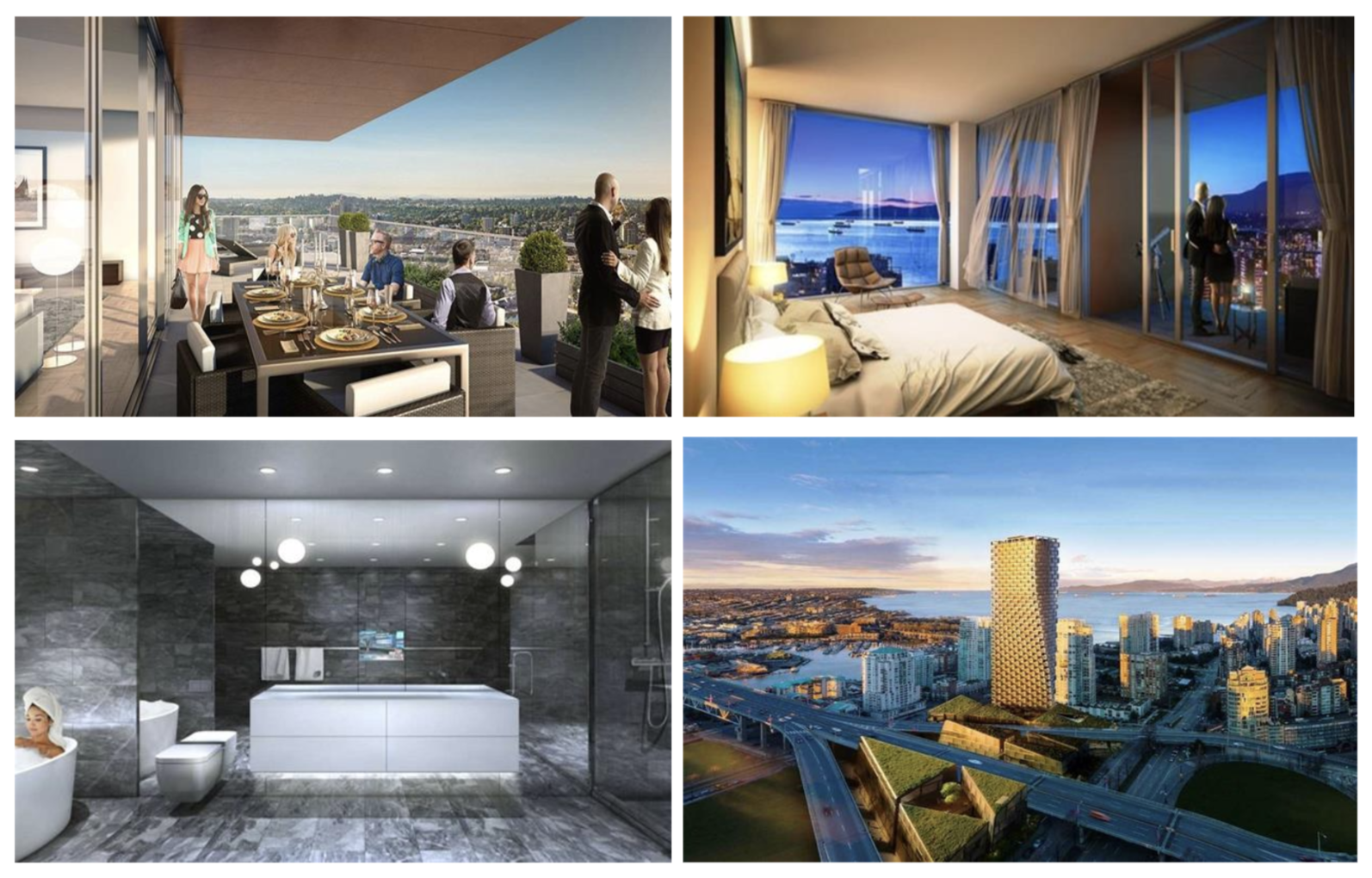 Located on the peninsula and neighboring Stanley Park, Yaletown and Coal Harbour, West-End Vancouver is an older neighborhood but also has some pretty staggering views as it faces English Bay at Sunset. Here, housing prices generally start at $800-$1,200/SqFt for the first 1-25 floors. But unlike Coal Harbour, Downtown Vancouver and Yaletown, West-End Vancouver does not seem to skyrocket in price after the 25th floor. But it does increase in price at 2.0% per square foot for every floor-level up. 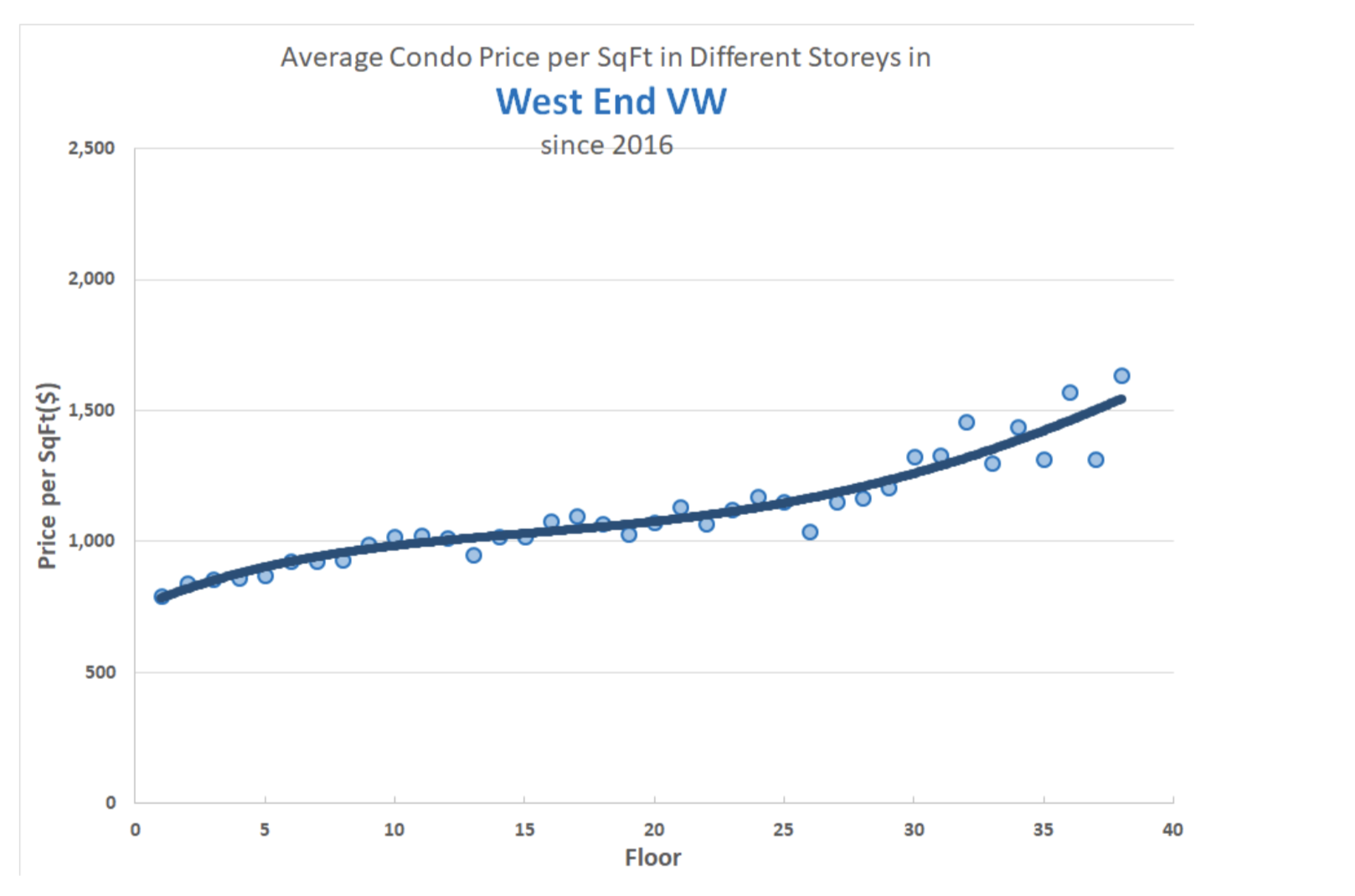 What does a top floor property in West-End Vancouver look like? 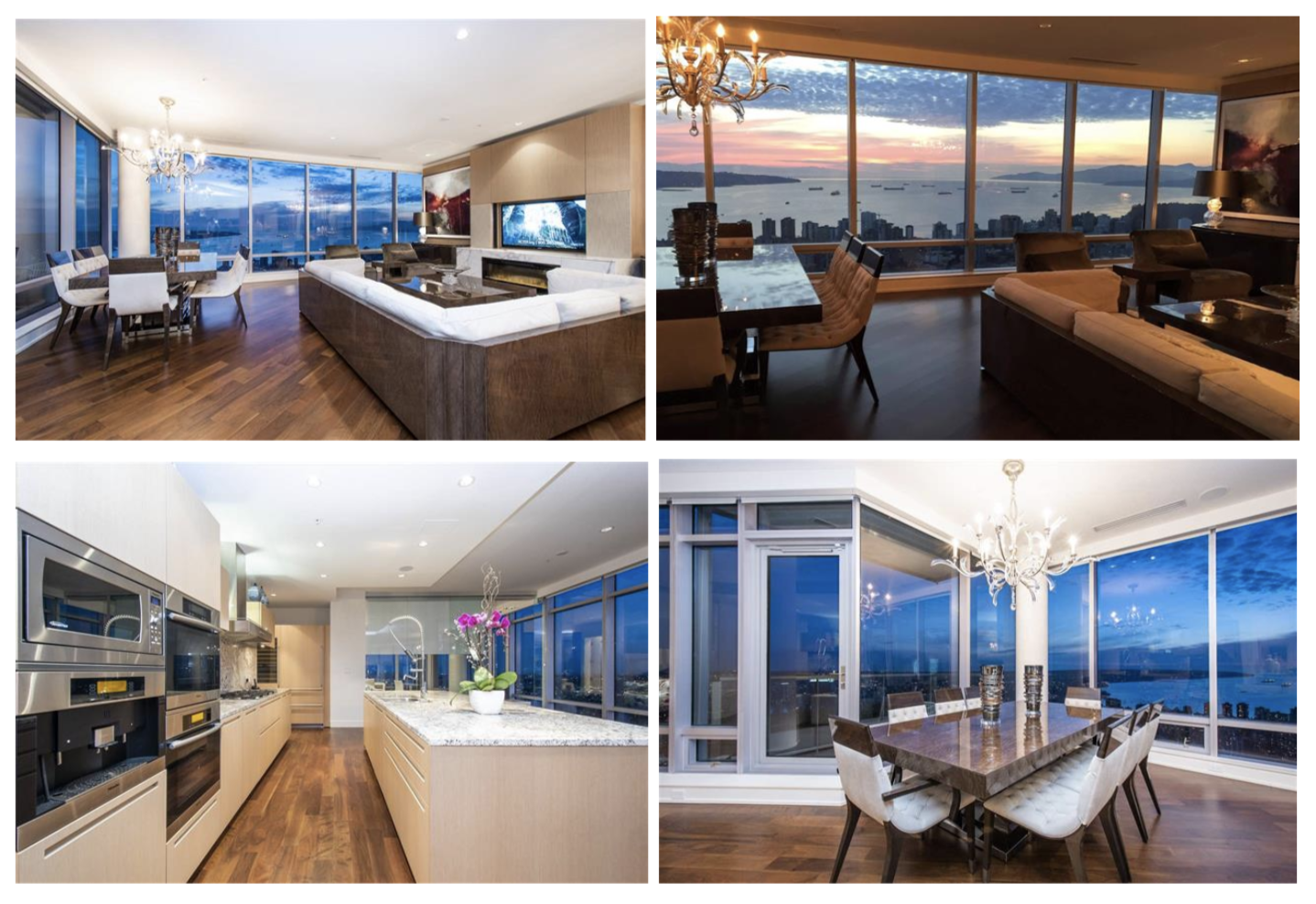 As the buildings move more inland toward Greater Vancouver, starting prices per square feet are much lower than the downtown core at around $700-800/SqFt for the first 1-25 floors. In addition, in Brentwood Park, unlike Vancouver, the price per floor-level up does not increase dramatically at an average of only 1.4% per square foot, per floor-level up. This is mostly to do with living inland, where the views are not as extravagant and the cost of living is not as extreme. 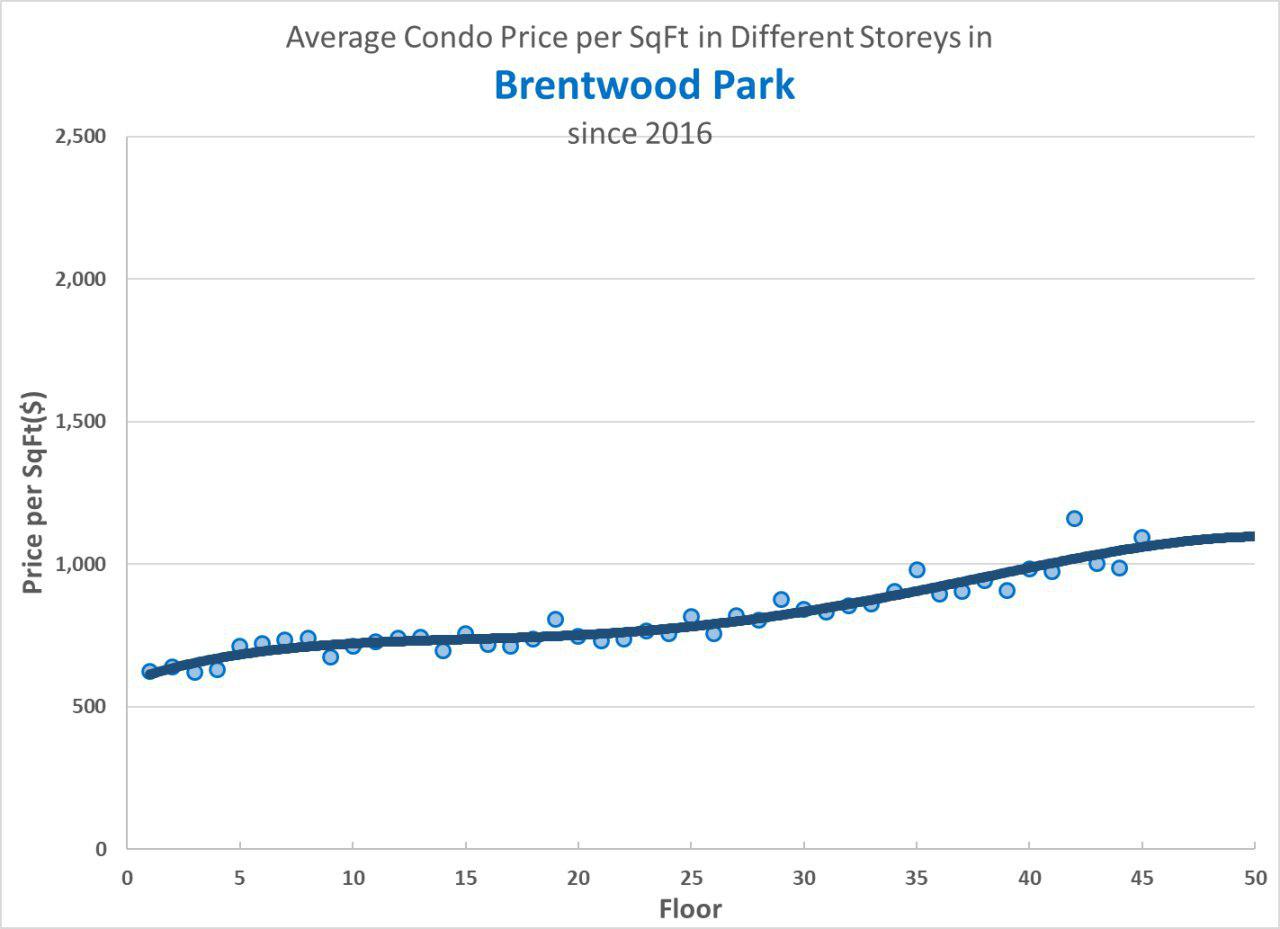 What does a top floor property in Brentwood Park look like? 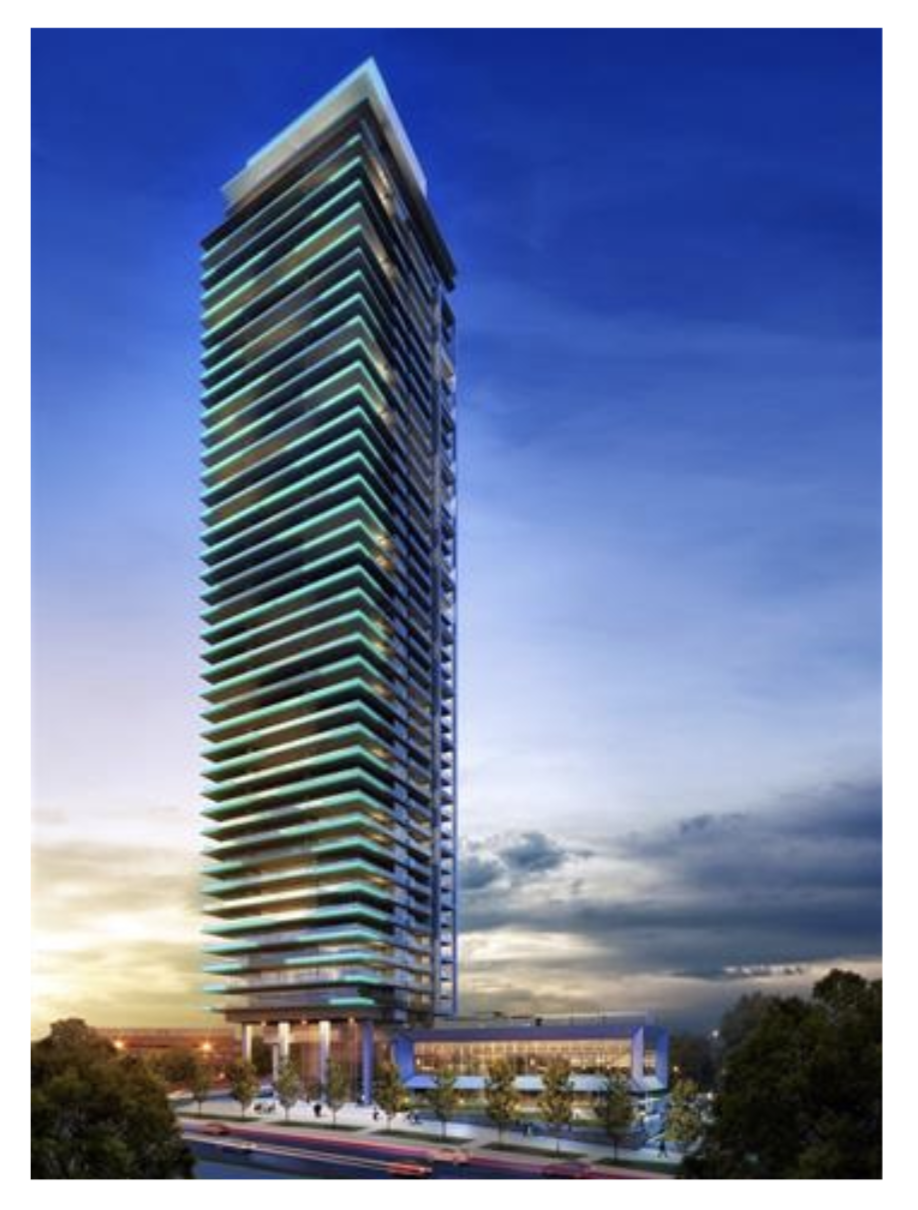 Located on the lower mainland, North Coquitlam is mainly suburban with a few high-rises. With high-rises not as popular not abundant in North Coquitlam, there is not much of a change in price as the floor-levels rise. This price increase is approximately 1.38%. For example, to live in this beautiful apartment building located on Atlantic Avenue, North Coquitlam, it will cost $1,153 per square foot to live on the 29th floor. But keep in mind that although the average is $700 per square foot, this is not the case for the apartment on Atlantic Avenue since it is more luxury than the typical apartments shown in this area. 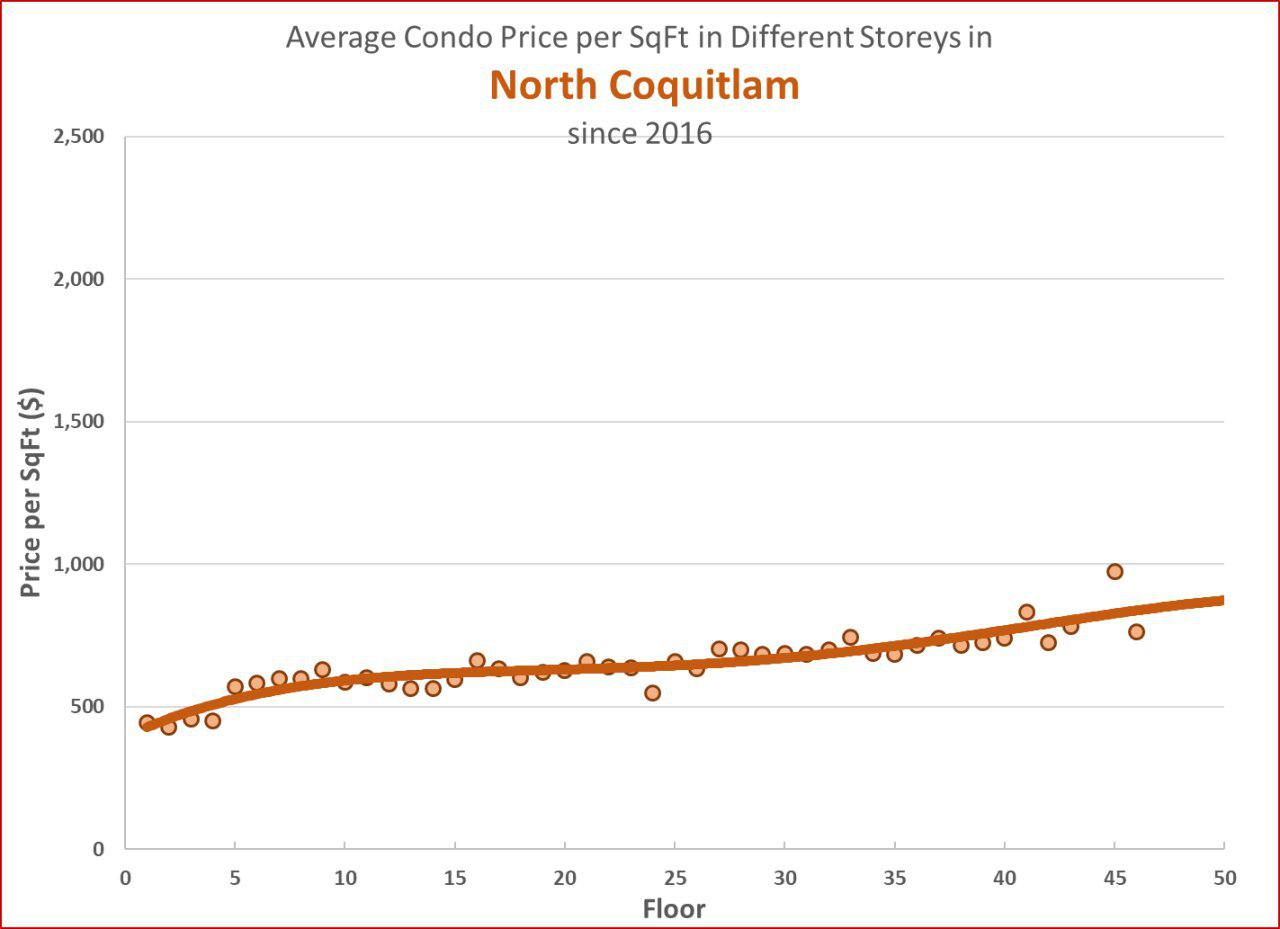 What does a top floor property in North Coquitlam look like? 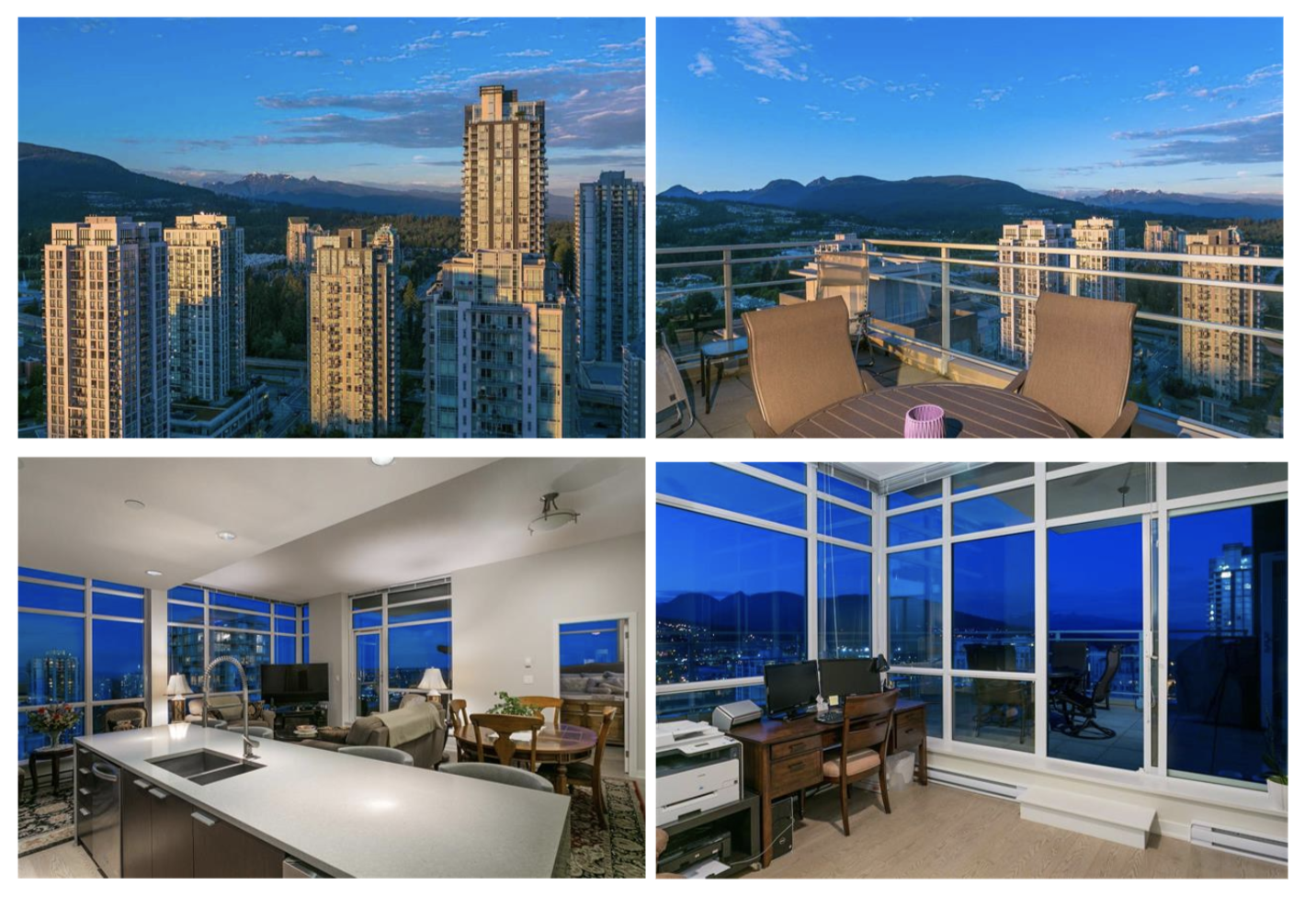 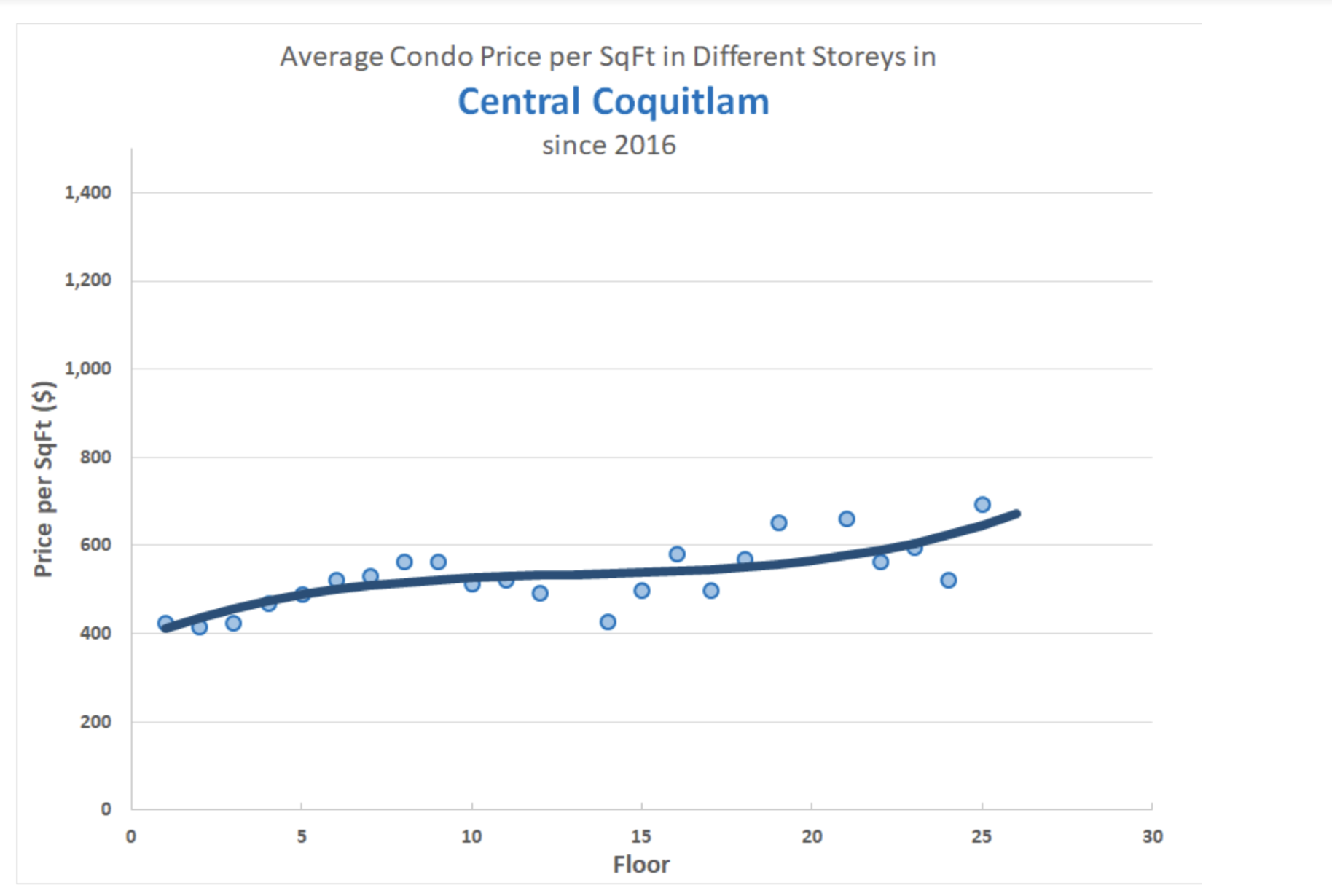 What does a top floor property in Central Coquitlam look like?

Beedie presents The Heights on Austin, located in the heart of Austin Heights in Coquitlam, surrounded by unparalleled views, restaurants, shops and services. This Penthouse offers an open layout with plenty of windows for natural light, expansive 270-degree river and mountain views. 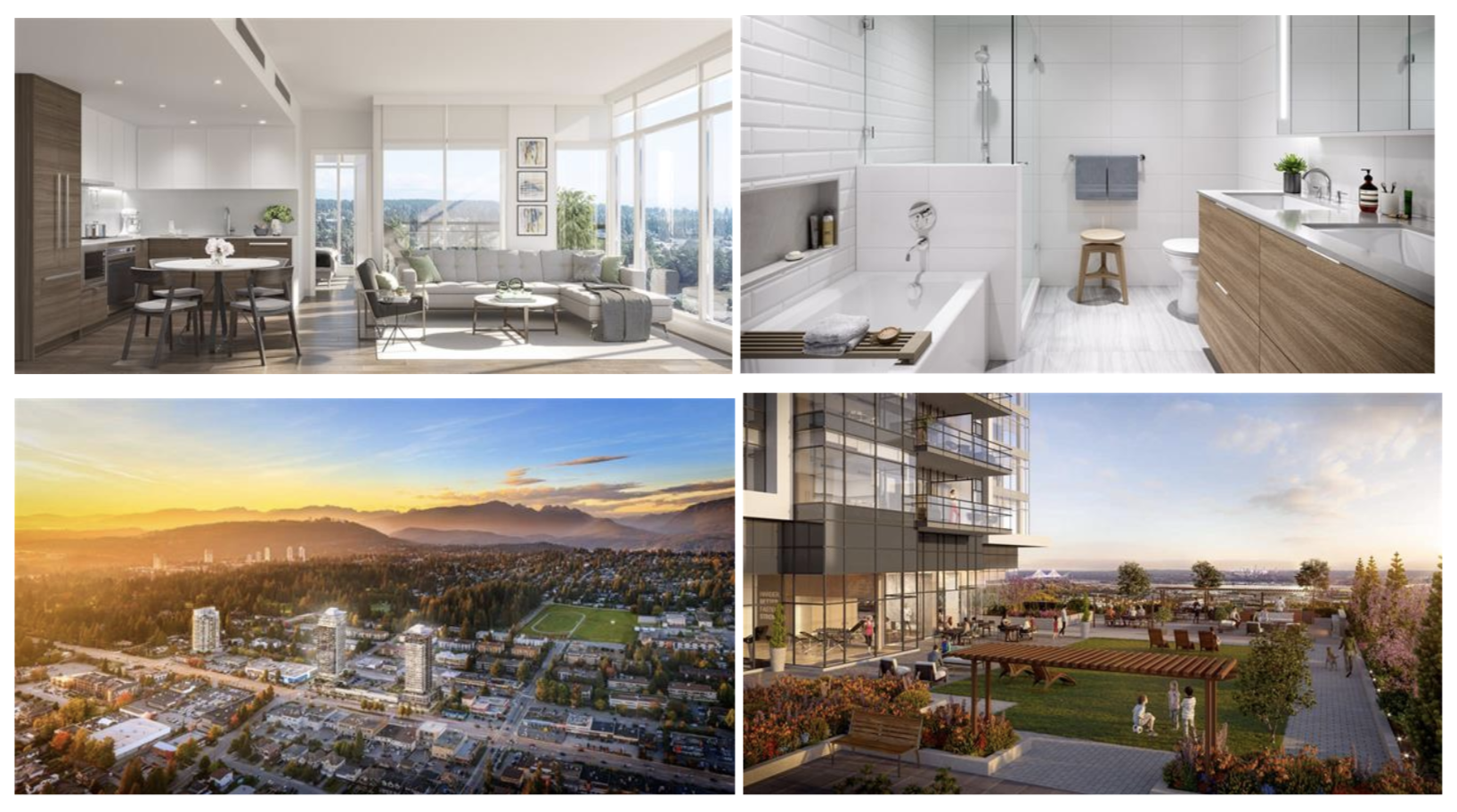 Being the third-largest city by population in British Columbia, it would be reasonable to think that the higher up, the more it would cost to live in Metrotown, but this is not the case. In Metrotown, it costs approximately $600-850 to live within the first and the 25th floor with an average of 1.4% increase in price per square foot for every level-up. Like many of the cities in Greater Vancouver, Metrotown does not fluctuate as much in price due to its location outside of the city and lack of ocean views. 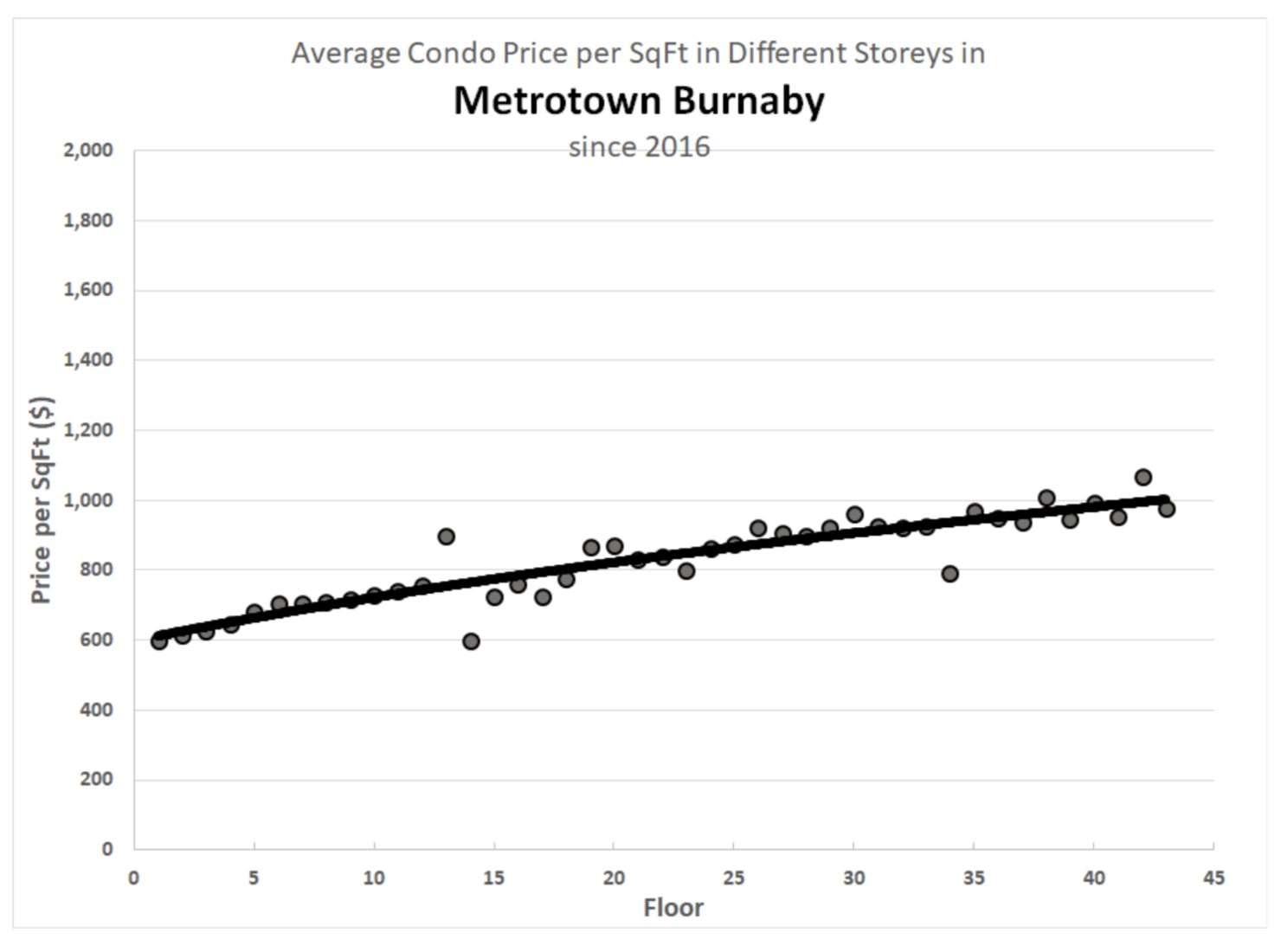 What does a top floor property in Metrotown look like? 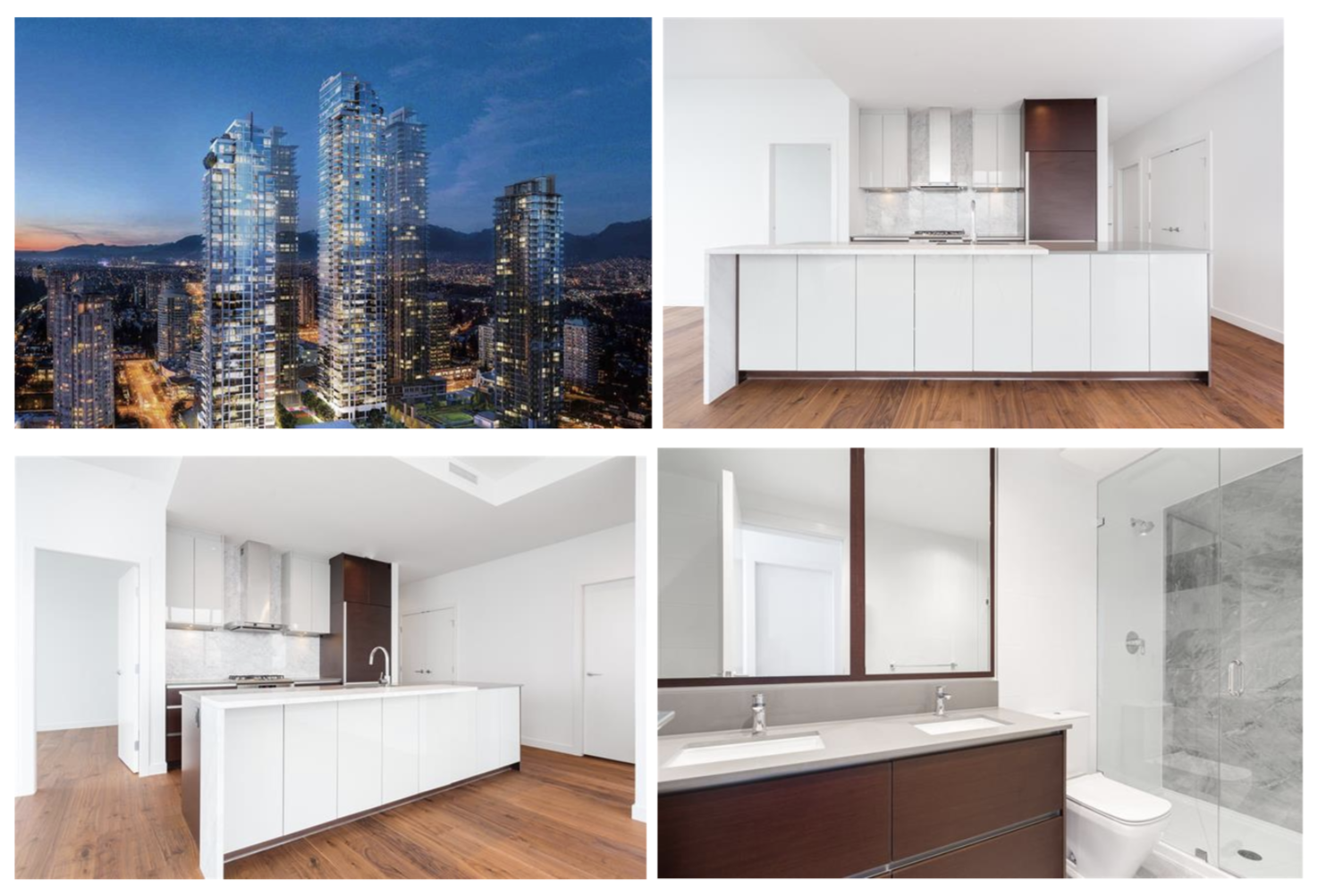 Located in North Vancouver across the Lions Gate Bridge, Central Lonsdale has lower-level pricing at $600 and higher-level pricing at 1,250/SqFt to live in this area. However, this price is pretty average for living in close proximity to Vancouver’s downtown core. But what’s most interesting is that Central Lonsdale has the highest price increase for every floor-level up at 4.1% more per square foot, per floor-level up. Although this may seem strange, it is mostly due to some of Central Lonsdale’s staggering views overlooking the Harbour and city. 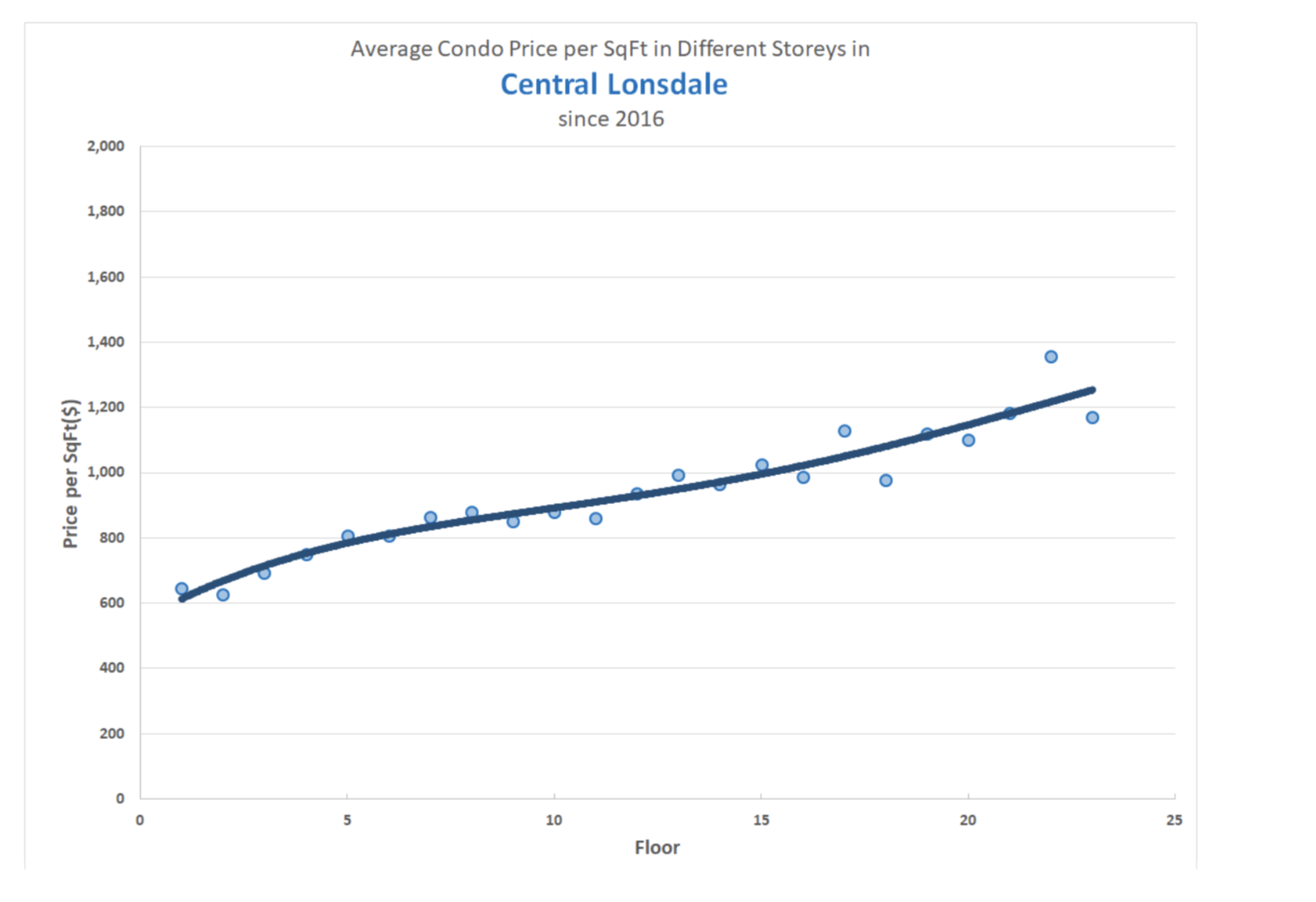 What does a top floor property in Central Lonsdale look like? 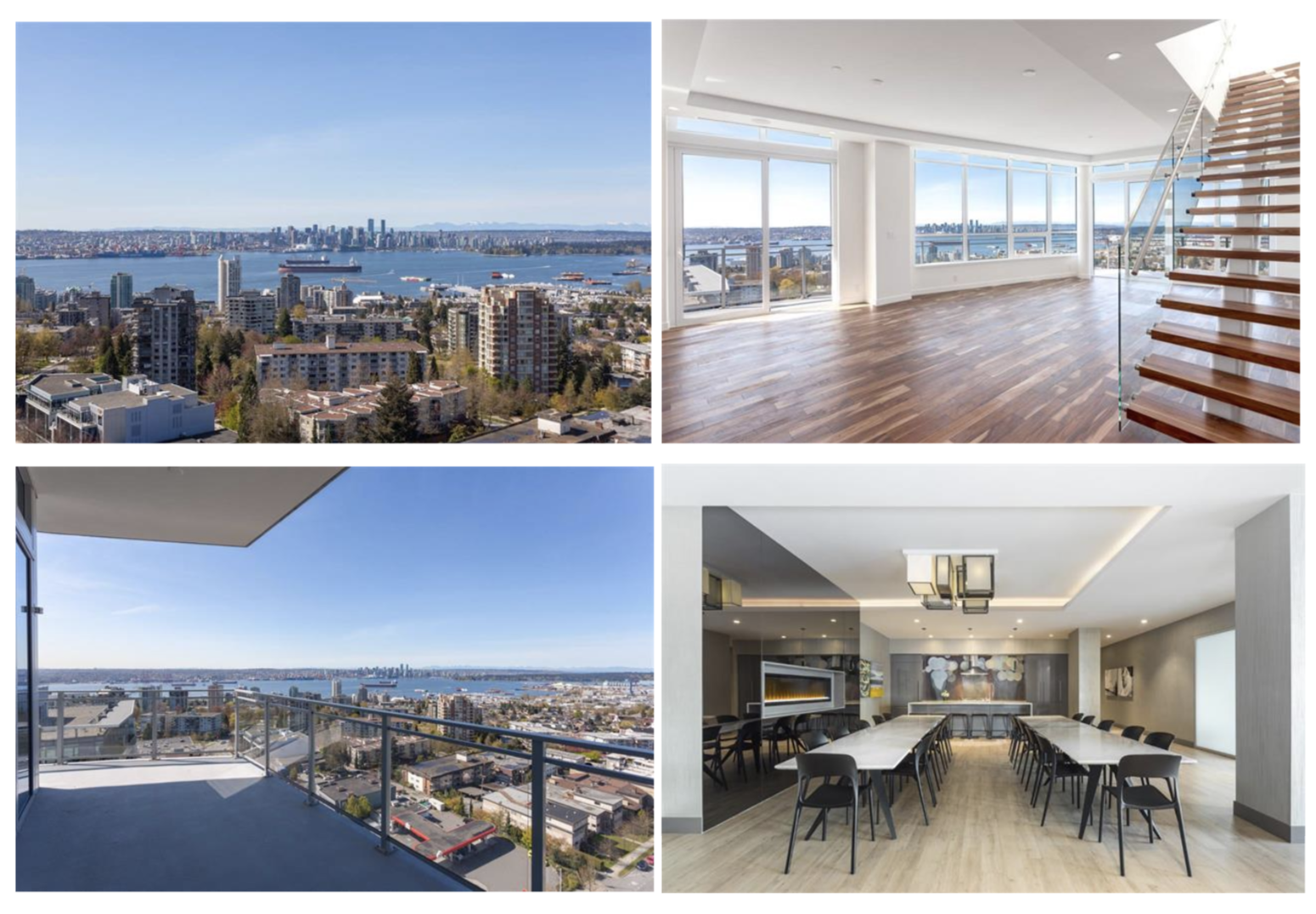 It is important to note that for neighborhoods that naturally have more apartment buildings and skyrises with different age groups, there are more data points and therefore, the averages per square generally fluctuate more than areas that have fewer older apartments. For instance, the data points on the Yaletown and Coal Harbour graph are much more dispersed than they are on the Brentwood Park and North Coquitlam graphs which are almost all newly built sky-rises.

Generally, if you want a view, you’ll pay for it and this tends to be the case among many Vancouver neighborhoods–especially for those facing Vancouver’s Harbour such as Central Lonsdale and Coal Harbour. But it is to note that if you’re not in it for a nice view, the best bang for your buck is an apartment building located mid-level, generally in more inland locations such as Brentwood Park and Coquitlam versus Central Lonsdale and Coal Harbour.