Number Vancouver realtors projected to decrease further in 2019 and beyond according to Roomvu, a real estate data and analytics company

Vancouver, B.C. – Real Estate in Vancouver and Vancouver realtors has been a hot topic long before it started to cost the average person more than half their income to rent a space the size of a large car. In fact, Vancouver was the first city in Canada where a real estate board was set up, all the way back in 1888. At that time, Vancouver’s population was around 13,000 people, and cars (large or small) didn’t even exist.

One-hundred and twelve years later, in the year 2000, there were nearly 7,000 realtors in the Greater Vancouver Area (GVA), and just under 2,000,000 people living there. But only 17 years later, the number of realtors in the GVA nearly doubled to below 14,000. The overall population increased as well, but by only 30%.

“Cities like Vancouver, where housing is expensive, have a higher number of realtors than cities like Halifax, for example,” explained Sam Merhrbod, CEO of Roomvu, and a realtor in the Greater Vancouver Area. “As home prices go up, so does the financial incentive to take advantage of higher commission prices. 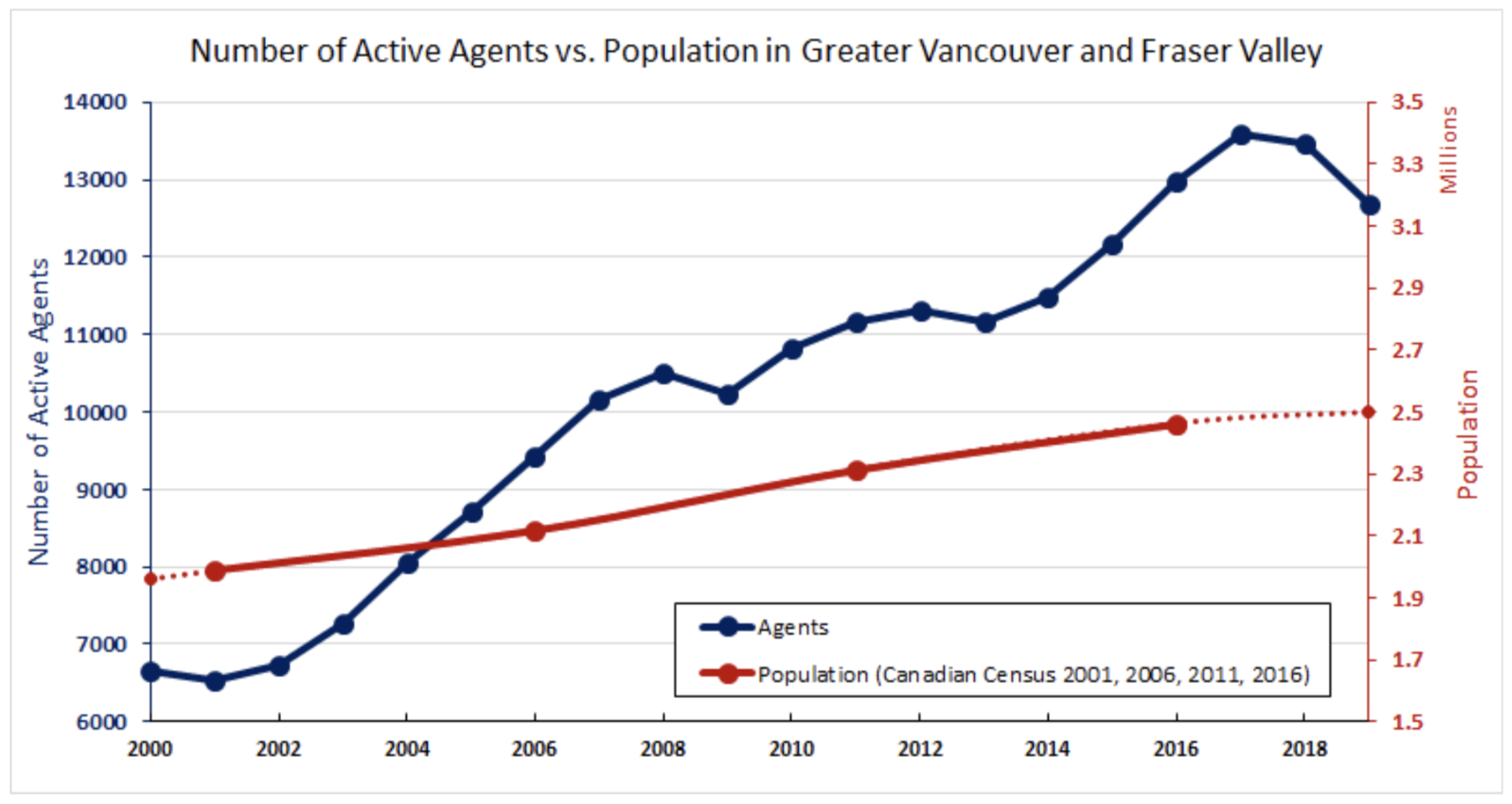 Anyone who has been awake for the last few decades in Vancouver would have noticed that the housing market is indeed hot. But there have been two notable exceptions in the last 15 years. 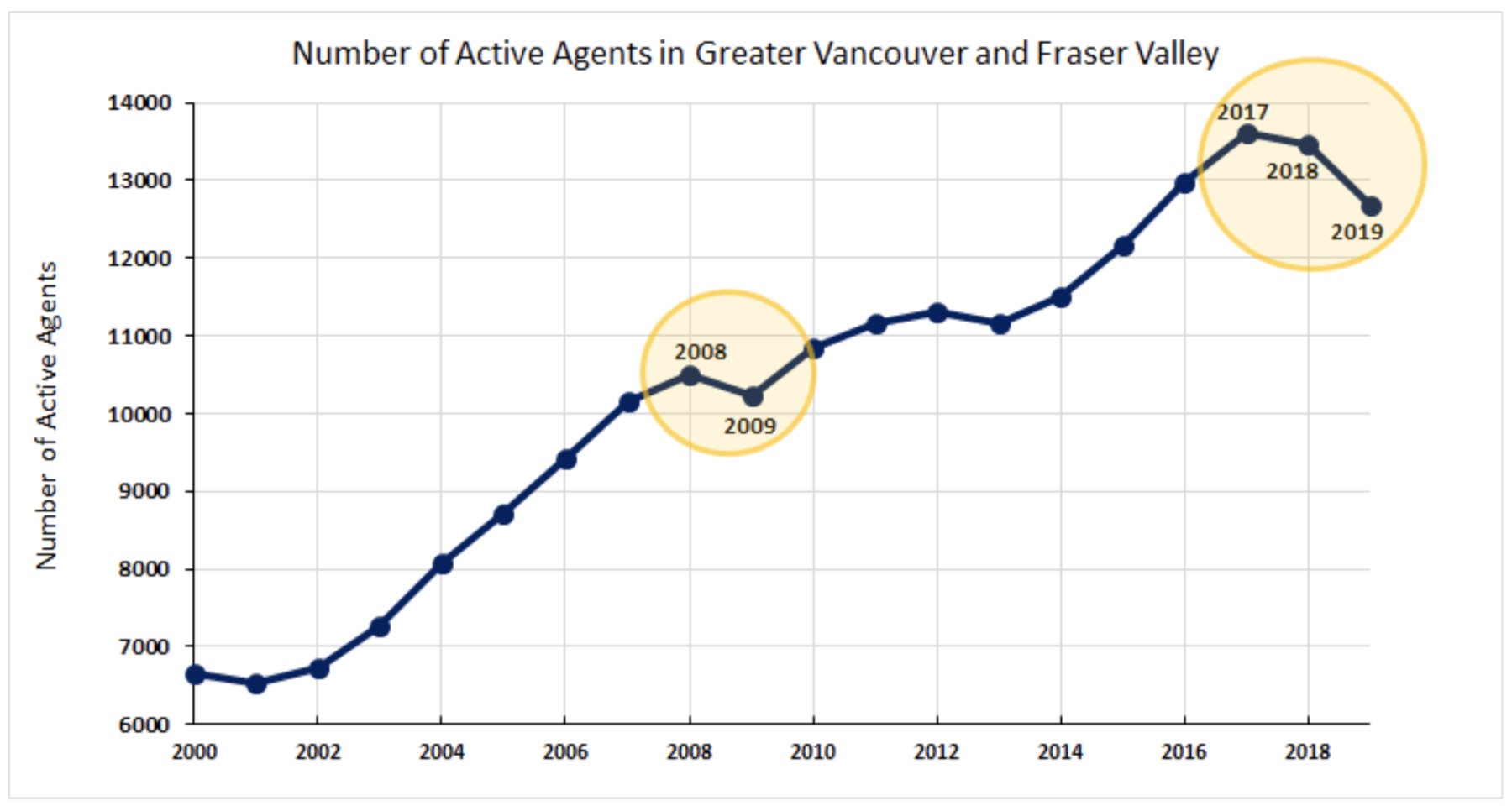 The financial crisis of 2007-2008, drained trillions of dollars from the world economy. And though Canada came out of the Great Recession relatively unscathed, it still had an appreciable impact on the country, including on Vancouver’s housing market. As expected, the number of realtors declined modestly as well, from around 10,677 to 10,397 – the first decline in quite some time.

The year 2018 saw the introduction of several federal, provincial and municipal measures to curb housing prices. The B20 stress test, empty homes tax, foreign buyers tax, speculation tax, provincial school tax, limits to, and taxes on, short-term rentals, have all had a decided impact on the housing market in 2018, 2019.

“Home sales in B.C. in 2018 would have been approximately 10 percent, or 7,500 units, higher if the B20 mortgage stress test hadn’t been introduced,” according to an economic study by the B.C. Real Estate Association (BCREA). The BCREA also speculates that measures such as the expansion of the foreign buyers and speculation tax could have played a role. So what does this mean for realtors?

The data doesn’t necessarily suggest a mass exodus from the realtor market, or at least, not yet. Perhaps the decline in the number of realtors is simply a market correction, much like the correction in home prices.

One thing appears to be obvious though: when homes are selling, there will be realtors lining up to sell them. And when homes aren’t selling, realtors go somewhere else to make ends meet in a city where, despite modest decreases in home-prices, it costs a lot to live.